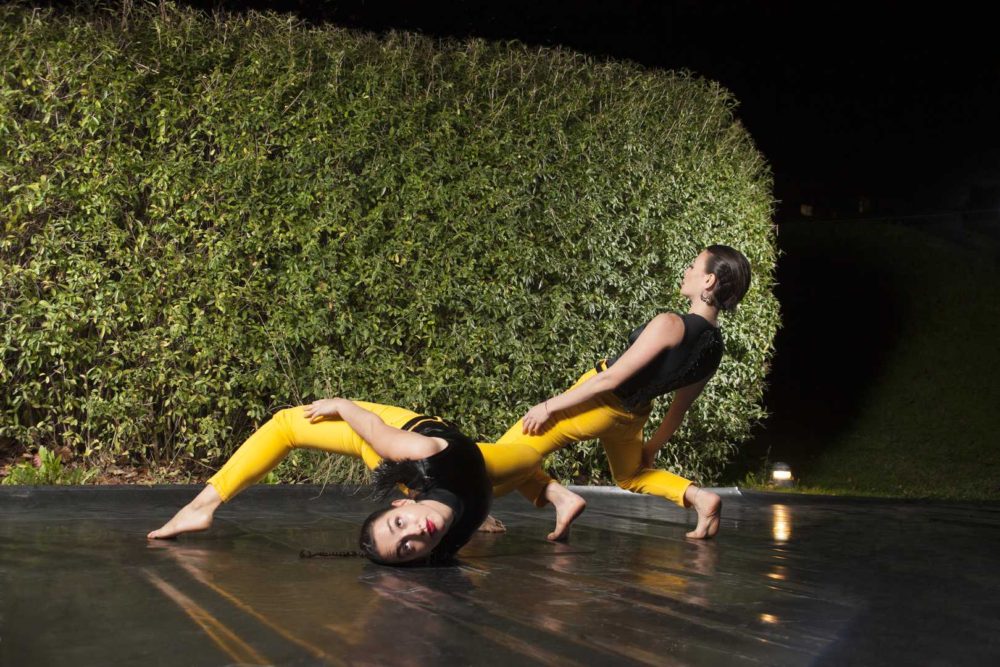 Sat in the bleachers before the lights dimmed, I was not sure what to expect. I’m no dancer myself and, apart from being partial to a bit of Strictly, my expertise is limited. I was about to see nine young international artists bridging the gap between their training and the ‘real world’ through three unique dances from three choreographers. I hoped that it wouldn’t be pretentious or inaccessible, but was excited by the prospect of three standalone pieces each with separate choreographers, sound and costume designers.

The triple bill opened with Irresponsible Gods, an artificial intelligence-inspired piece choreographed by Cameron McMillan along with the dancers. Despite having a dystopian, futuristic feel, it didn’t feel like a cliche robot dance or a Doctor Who re-enactment. Each dancer had their time to shine, breaking off from the main united structure for their own solo part. It was a strong start.

But after the relative clarity of the first dance, the next one un-sound threw everyone off. In this piece, choreographed by H2DANCE and Transitions Dance Company itself, all nine of the dancers in the Company were present on stage. But even those we had already seen were unrecognisable with wigs, hats and capes as part of their costumes. They seemed animalistic and cavemen-like. As their voices provided the soundtrack, the audience was confronted with hoots, calls and cries as the dancers edged their way towards us.

The programme asks us: “What are these things? Who are they, and where are they from?” It’s a pretty good question, with the medieval fabrics transforming slowly into more neon, fluffy and furry as the dance progressed. All I could think was: cavemen turning into birds? Who knows, I guess that question remains unanswered. Unsure whether the dance’s intention was to make you laugh at the absurdity of it, or to take it seriously, I was surrounded by nervous laughter. One woman completely lost it halfway through and could hardly stop laughing for about ten minutes. Except for the nervous giggles, we were all pretty lost for words. The initial intimacy of the venue had warped into an uncomfortable, confronting closeness. I didn’t know what I’d just seen, but I think I liked it.

The final dance emerged as the most impactful; Firstly, my name, choreographed by Elisa Pagani, told a tale of identity, community and hope in the context of immigration. We saw the performers left for dead, choking for air before they shed their full-body costumes to reveal glistening gold outfits underneath. A story of rebirth and freedom, each dancer’s name was shouted towards the end of the dance. As with all three dances, the lighting was minimal but effective, becoming golden and celestial to reflect the change in mood.

Overall, Transitions are captivating to watch, presenting works full of contrasting emotions and timely political themes. I went in unsure of what to expect, but I’ll now be keeping a lookout for their next performance in Cardiff.

Transitions Dance Company are on tour until Sat 6 Jun. Tickets and info can be found here.