Simon Amstell has surfed the TV-to-standup-to-film-director pipeline with plenty of success, but like the best of us, he still wallows in shame, tied down by the society we live in. New live show Spirit Hole is about escaping that… hole, and ahead of its Cardiff date he spoke about it to Carl Marsh.

Whilst planning for this interview, I noticed magic mushrooms are mentioned on the flyer for your upcoming Spirit Hole tour; rewatching your Netflix comedy special Set Free, meanwhile, you’d talked about taking MDMA. So how does this new one differ?

Hmmm, how does it differ? Well, I haven’t watched Set Free as recently as you have [laughs], so I can’t quite remember what was in it. But I suppose it continues with the theme of becoming more accessible and freer of shame, convention, and anything that doesn’t feel in alignment with who I actually am.

And what do you mean by that? Is there a big jump from Set Free?

I think it’s probably a big – if you were to compare; not that anyone will [laughs] – jump from a special I did for the BBC quite a few years ago called Numb, which is about depression. This one [Spirit Hole] is about finding your spirit, finding your joy. So it’s a much more sillier and joyful, playful experience as a show, I think.

One question I often ask comedians like yourself is about what they talk about: is their subject matter all fabricated – complete fiction – or just a spin on actual real events, so you can take the piss out of something, someone or yourself?

I don’t make anything up. Everything I’m saying on stage is stuff that I’m feeling and what’s happened to me.

So the sex party you attended that you talked about on your last tour was real?

Yeah, I did that. Yeah. I don’t really have any interest in making everything up [laughs] – I don’t know why anyone would. I mean, to me, it would be lying. And there are plenty of jobs you can get if you want to be a liar. I feel quite strongly that standup comedy is a place where you express the truth.

What do you get out of being truthful on stage?

Part of what I get out of it is freeing myself of embarrassment and shame. So I tend to say things out loud that I’m worried about ‘saying out loud’.

Yeah, I think I feel better afterwards. I think the audience can feel less alone in their shame. And to me, the whole thing – certainly in this new show – is this joyful, shame-clearing experience [laughs].

Once you’ve done this tour then, you’ll be cleansed – cleansed of everything?

I think you just end up peeling off more and more layers. So when I was feeling depressed 10 years ago, that’s what I had to deal with. And those were the feelings I had to find, somehow, a way to let go of. And then with this show, there’s just been three years’ worth of stuff that I’ve been in crisis over or have been on some journey to change… change isn’t the right word there. Sorry. I got a bit lost! [Laughter]
In this show, there’s the crisis about getting older. There is a lot about being in a relationship for 10 years, stuff about expectations around gender and masculinity. And then quite a bit about – as you were saying – magic mushrooms and ayahuasca. And there’s another story about a sex party, just to make sure everyone gets what they want. 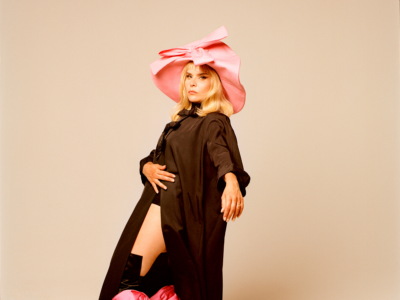