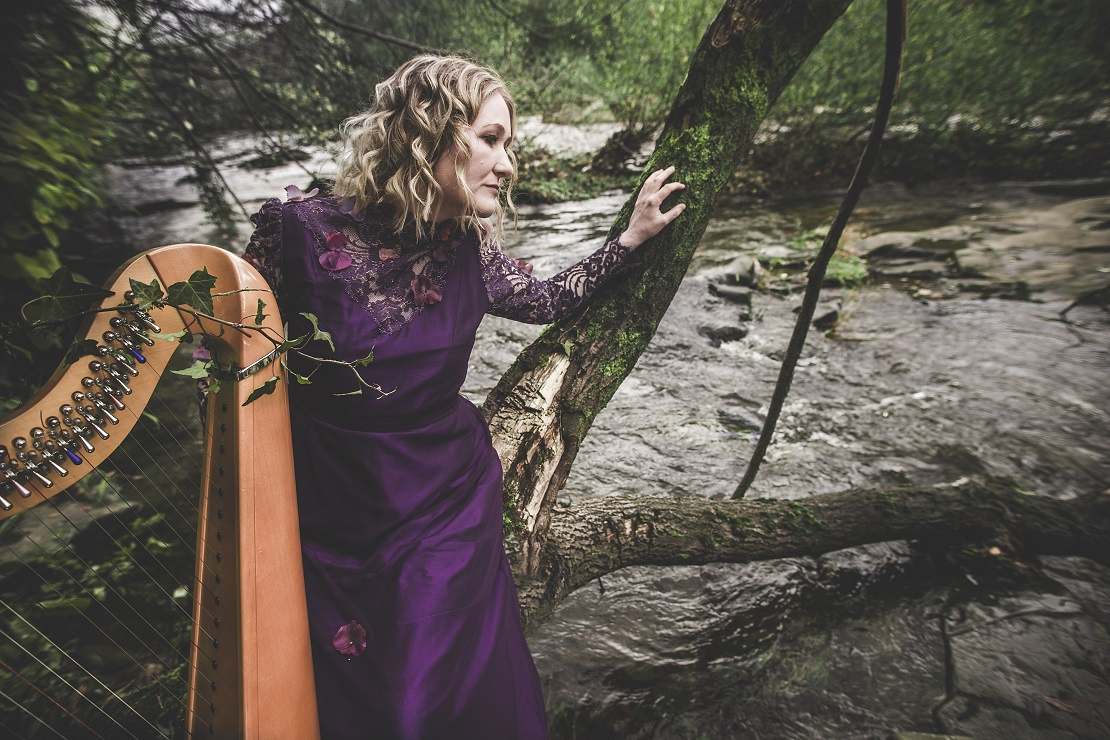 Self-described “ethereal Celtic folk from Wales”, a long, strange trip across the rivers and valleys of the music industry has finally yielded a debut album, Ffiniau, by this harp player from Pontypridd. Carl Marsh found himself admiring Bethan Nia’s pluck.

The harp, as an instrument, has fascinated me since childhood, yet I’ve only ever touched one once. Where does your love for it stem from?

It was from school. It’s our national instrument of Wales, and it’s so intertwined into our Welsh culture, such as the Eisteddfod. It’s been in our culture and history for hundreds of years, dating back to at least the 11th century. Because I went to a Welsh-medium school, there’s a harp and a teacher to teach you in most of the Welsh schools, which is a wonderful opportunity. It’s a shame that it’s not as prevalent in English medium schools.

I agree. We were lucky to get a trumpet, a trombone or a recorder to play in my English school!

[Laughs] We had recorders at school too, and the violin. You can’t really play anything nasty or ugly on the harp, you know, it’s not like learning the violin. The good thing about the harp is its harmonics and sound; it is very forgiving when you’re learning.

It was definitely because I went to a Welsh-medium school and was also embroiled in Eisteddfod, competing and singing Cerdd Dant, which is a form of singing verses to the harp. I went to Sunday school, and I was always performing various activities and things to do with chapels, so that’s where I got to play the harp. Singing folk songs was just a natural part of life for me.

I had lessons on the pedal harp, which is the Big Harp, until I was 16 – and then I completely left it and didn’t play for many years. I went to the Royal Welsh College Of Music & Drama – I was an actress for years before being drawn back to music.

And then flash forward a good few years to when you had taken up the harp again. You got on a train, and a passenger with a golden performance offer fell into your lap – except you nearly sat on his lap! Michael Eavis was sitting on your allocated seat, and he had to move for you… and you ended up playing the 2007 edition of Glastonbury.

It was quite a funny, surreal thing because, of course, he’s very distinguished-looking, isn’t he – I knew who he was straight away with that beard. He ended up sitting opposite me, and my partner Richard was kicking me under the table. But he was so down to Earth, and you know us Welsh, we like to have a chat…

So I just started talking to him and brought up the harp, not thinking that much about it, and then right at the end, he asked me if I would play his opening of the village hall because he’d given some money towards it. I did, and then from that, I got the gig at Glastonbury. When I played at the village hall as well – it doesn’t say this in any press release, actually – we were supposed to be staying in a local B&B, but there was no room, so we stayed at his farmhouse. And in the morning there was no milk, so he went to his cows to get some!

What’s happened since that Glastonbury slot, to 2021 and the upcoming release of your debut album?

I’ve been on a bit of a journey. I have played quite a few nice high-profile gigs, but I wasn’t sure about what direction to go in in terms of making an album. I was keen not at the time just to bring out a ‘girl with a harp’ album. It took me then quite a few years to develop my writing and find my voice, really, with the harp.

And then I had my daughter, and time was taken up with that. So it’s been quite some years now, but I’m finally bringing out this album, even though I’ve been playing them over a number of years with a lot of the songs.