You are here: Home / Reviews / LAST OF THE RED HOT LOVERS | STAGE REVIEW

‘NEBBISH‘: Americanised version from the Yiddish word nebech. A male who is inept, unfortunate, timid, weak – take your pick – in other words, a loser. That about sums up 45-year-old married Manhattan seafood restaurateur Barney Cashman in Neil Simon’s Last Of The Red Hot Lovers. The three-act play follows his exploits through a year (1969) of trying to get lucky. Faithful to Thelma, his wife of 23 years, he’s now going through a midlife-crisis and wants to experience the sexual revolution up-close and personal. His only other partner in making whoopee was with a much older hooker, in a single night while in high school. The three women he wants to make it with are a hot mess. One is clearly nutty, another slutty and the other a real fuddy-duddy. Or are they? Depending on your gender, age and morals, you may question the description of the latter two. And what does that make Cashman?

The scene of Barney (Alex Nagle) trying to make the scene is his mother’s efficiency apartment. He’s got two hours until she comes back from her hospital volunteer job. With new-found courage, he brings a briefcase with liquor and glasses (can’t risk using moms!) and waits for hot-to-trot, tough customer Elaine Navazio. The also-married Elaine breezes in, takes off her furcoat and in a NY second, is drinking up his supply and having a nicotine fit. Wanting to get down to business and get laid, she has no patience with Barney and his wish for an idealised fantasy of a love affair. Strike out #1.

It’s now summer and next up is leggy, 20-something, flakey actress Bobbi Michele, who Barney met in the park and lent $20. At first, he thinks she’s just ditzy, but a sure thing. Not knowing what he’s let himself in for, he listens in amazement as she tells one whopper after another of being taken advantage of. Upon hearing about the big-wig politico who kidnapped her dog, Barney realises he’s entered The Twilight Zone. He not only wants out of any liason, he wants her out of the building ASAP. No dice. He has to smoke pot with her, or she’s not budging. We learn he gets stoned (“I can hear my eyes blinking”) but only has a chaste sofa sing-a-long. Strike out #2.

By the time neurotic, morose Jeanette Fisher schleps in, you know he’s headed for Strike out #3, not third-time’s the charm. She and her husband Mel are friends with Barney and Thelma. He’s under the impression that she’s attracted to him, but she wants to serve revenge to Mel for cheating on her. No, wait, she’s there to play righteous Truth Or Consequences. Jeanette’s not even sure what she’s doing there.

When a tall Nagle stepped onstage (think Don Draper type with glasses) I thought, “No way. This trim, handsome guy with all his hair has problems seducing women? Fuhgeddaboudit”! Going by other shows and the film version, short, overweight and balding is the look we’re going for here, so On In 5’s production came out of left field. I get where director Jemma Gross was coming from, going against the grain and proving sexual attractiveness isn’t exclusively dependent on looks and that an attractive person can be confience-challenged, too. At times, Barney’s speech and mannerisms were more effeminate than ineffectual, but Nagle gave an hysterically funny performance that had you rooting for a man ready to cheat and made him sympathetic. Despite being cast against type, he was especially believable displaying flashes of emerging machismo when getting worked up.

Philippa Burt was one bitter, tough cookie with a crumbly inside. Her wisecracking Elaine clawed her way out of the gutter and married well, but would still break your arm to get those last pair of shoes at a Bloomies’ sale. Faultless timing. Perfection! Give her the “Can’t Believe You’re A Brit” Big Apple Adoption award.

What a find Sarah Pitard was! Wide-eyed innocent, sly con and unhinged paranoid in one lithesome package. Giving Bobbi a harder edge, Pitard displayed flashes of darkness, veering from scary to spaced-out, making her more than the airhead back from L.A.  Hilariously sharp, versatile and captivating.

The less-flashier role of Jeanette – emphasised by dowdy dress, purse and shoes – was played by Ellen Verenieks. Her “Nervous Nellie”/Edith Bunker-ish portrayal had the audience in stitches of laughter, also. This Jeanette was a bit more overwrought for me, but the skill was certainly there. Gross’ direction was savvy and sharp for this retro Simon romp on morality and mortality that’s still relevant. The one-room set and costumes were of-the-era vintage, with clothing highlighting the gap between Bobbi’s generation and the rest of the cast. Shame the play only had a two-night slot, should have had a longer run! Lemme tell ya, deez guys hit it outta da park! Made me feel right at home! 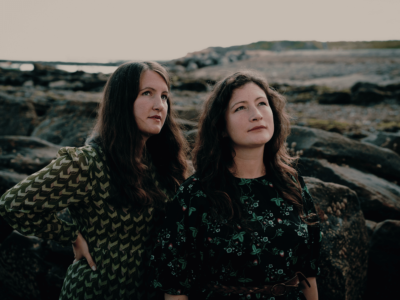