You are here: Home / Culture / Music / THE SLEEPER | OPERA REVIEW

Welsh National Youth Opera (WNYO) take the audience on a compelling journey in The Sleeper: physically through The Coal Exchange building in Cardiff Bay and imaginatively into a world where sleep is a distant memory.

This nightmare scenario initially feels like something out of Torchwood. Designer Rhys Jarman (who worked on a recent series of Doctor Who) creates a very believable ‘cardboard city’ in the building’s basement for the first act of the opera. The audience are immediately disorientated, as they are led through this space by the young people squatting there. The squatters are hiding from the military, while protecting a sleeper – an individual who has regained the ability to sleep. That individual is therefore a danger to the repressive social order.

Composer Stephen Deazley creates an edgy sound-world with fragments of lullabies and strong percussive elements, which are supplemented by the hammering rhythms arising from the action. The libretto, written by Michael Symmons Roberts (who previously wrote the text for WNO’s The Sacrifice), drives the drama forward with snappy lines (and a reference to Turandot), while Music Director Tim Murray conducts the small orchestra with appropriate urgency.

This is very much an ensemble piece, with the WNYO chorus constantly moving as a unit rather than as individuals; with excellent direction and movement direction by Pete Harris and Ayse Tashkiran, respectively. The ensemble singing is first-rate and it’s hard to single out individual singers, although David Jones, Holly-Anna Lloyd, Emily Griffiths, Michael Lowe, William Helliwell and Celine Forrest, as the main characters, deserve to be mentioned for their performances.

A potential problem with any promenade opera is that the mood may be lost on the journey between the main performance spaces. In The Sleeper the promenade under the scaffolding outside the building (all cardboard and 1984-style posters), into the limbo space inside the building, and then through to the final act, serves to build up the tension. There is effective use of recorded electronic sound (composed by Matt McDade), a smoky half-light (lighting design by Rachael McCutcheon) and film (David Massey), but mainly it is due to the excellent acting of all the young cast. Moving through the audience (it would be hard to get closer in or more involved in an opera production) they generate a very haunting ambience.

The final set in the main hall of the Coal Exchange has nightdresses hanging from the ceiling, a bed in a cage and a raised office-come-film studio. The group have temporarily escaped the military, but have been drawn into the world of a wealthy individual called Hypnos (Tim Nelson). As a child, he filmed his mother sleeping; she was the world’s last recorded sleeper. When he tries to identity the sleeper among them, the group realizes his motives are highly suspect.

At one hour and fifteen minutes, this extraordinary new production by WNYO is one opera that certainly leaves you wanting more. 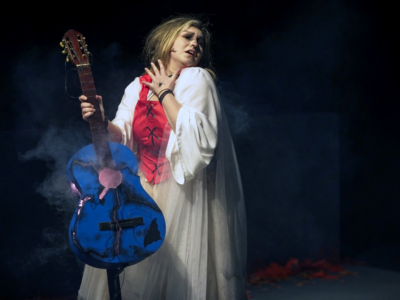 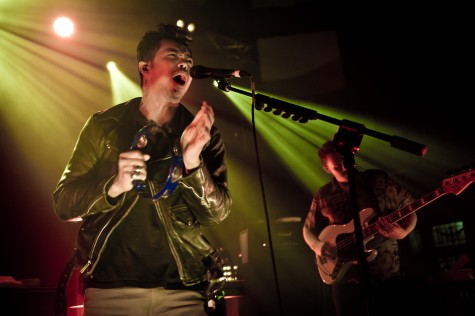