You are here: Home / Reviews / PRISCILLA QUEEN OF THE DESERT | STAGE REVIEW

It’s been a long, long time waiting to get back into the New Theatre, and after an 18-month closure – the longest in the venue’s 115-year history – a change of ownership and a new team, their first stage show is finally back. The doors flung open to a full house in a flurry of feathers, sequins and nine-inch heels – and that’s just the audience. Priscilla had arrived.

Priscilla Queen Of The Desert, the multi-award-winning show, is an in-your-face musical treat. The story follows three feisty drag queens as they travel across the Outback in a battered bus on a journey to perform the show of a lifetime. Along the way, they discover the true meaning of friendship, acceptance, honesty and a whole lot of adventure whilst clashing with outback locals.

Truths are told, lies are revealed and costumes are changed quicker than tickets being sold to the Abba reunion in this funny, witty and heartbreaking journey. All played out to a killer soundtrack: It’s Raining Men, Hot Stuff, Girls Just Wanna Have Fun and of course the anthemic I Will Survive, along with an hilarious rendition of MacArthur Park’s “Someone left the cake out in the rain” refrain complete with cake costumes. What’s not to love? All belted out and gratefully received by the showtune-starved audience.

The show is co-produced by Jason Donovan, who Buzz recently interviewed about his debut behind the curtain – and who played Tick when Priscilla toured in the West End. He loved it so much that when the opportunity arose, he got involved with a big creative and production team, and the attention to detail – from the costumes to the sets, wigs, hair, and makeup – is all flawless, fabulous and flamboyant. The cast are top notch and a joy to watch, especially the three amazing sequinned up singers, but it’s the three leads Tick (Edwin Ray), Bernadette (Miles Western) and Felicia (Nick Hayes) that shine: the chemistry is there and it’s powerful.

Priscilla is an all-out guffaw-fest, full of quips, one-liners and singalong/shake-your-ass numbers. For two and a half hours you’re riding through the Outback with them, laughing and crying and cheering them on, but mainly wishing you looked that good in a dress and heels and had buns of steel.

Go see it, you’ll feel better for it. It’s good to be back.

Priscilla Queen of the Desert 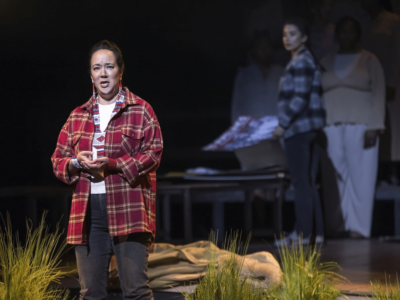