Friday’s promised thunderstorm never came; three days of muggy heat and heavy, glum clouds finally broke and framed the Norman fort in Cardiff Castle grounds against a candy-pink sunset for Primal Scream. Thousands of ‘90s bucket hat-wearing wild childs, each with a beer belly but still with a twinkle in their eye, took snaps while somewhere else within the walls, the Happy Mondays’ Bez – the headliner’s support – was lurking.

After bassist Paul Ryder (brother of Shaun) passed away not even one week prior to this Cardiff show, the Happy Mondays weren’t expected to even turn up – and nobody would have blamed them. But there they were, sans one, for a hearty run-through of the hits. “He’s not dead, he’s just prangin’,” Shaun said, to wild cheers.

The set-up of the event as a whole didn’t really seem to suit the Mondays. The venue was run like a festival, with strict, manned ‘In’ and ‘Out’ routes for areas like toilets and bars. The band seemed somewhat subdued on stage from the stories that I’d heard of them; call it the recent passing of a loved one or just age, but the crowd’s structure can hardly have helped.

The forward area of the audience was fenced-off from the rest, dubbed the ‘Golden Circle’, and sold for an upgraded price.

This is obviously extortion and kills a gig. Front of house works like natural selection; dragging the most rabid and the drunkest right to the band, who can then feed off their energy. They aren’t usually the types to have paid off their mortgage. For me, the Circle felt sparse and cold.

Despite this, Primal Scream played a whopper of a set, covering the entirety of the seminal Screamadelica and an encore of their biggest hits. Live, the band somewhat abandoned the house aspects of their most famous works – leaning more into the Rolling Stones-like choppy guitar licks and gospel melodies that made up the rest of their sound. Bobby Gillespie seemed spry and youthful as he confidently led the set deep into the night.

Between the warm Cardiff night, the company, and the glory of that Madchester sound that makes you want to praise the sky; in the broadest possible strokes, a little bit of ‘91 was well and truly alive that night in the Castle. 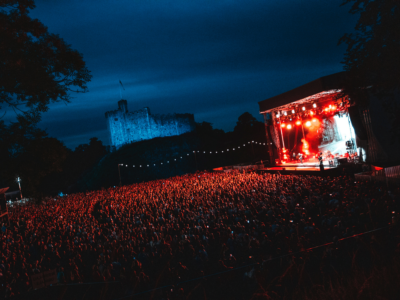