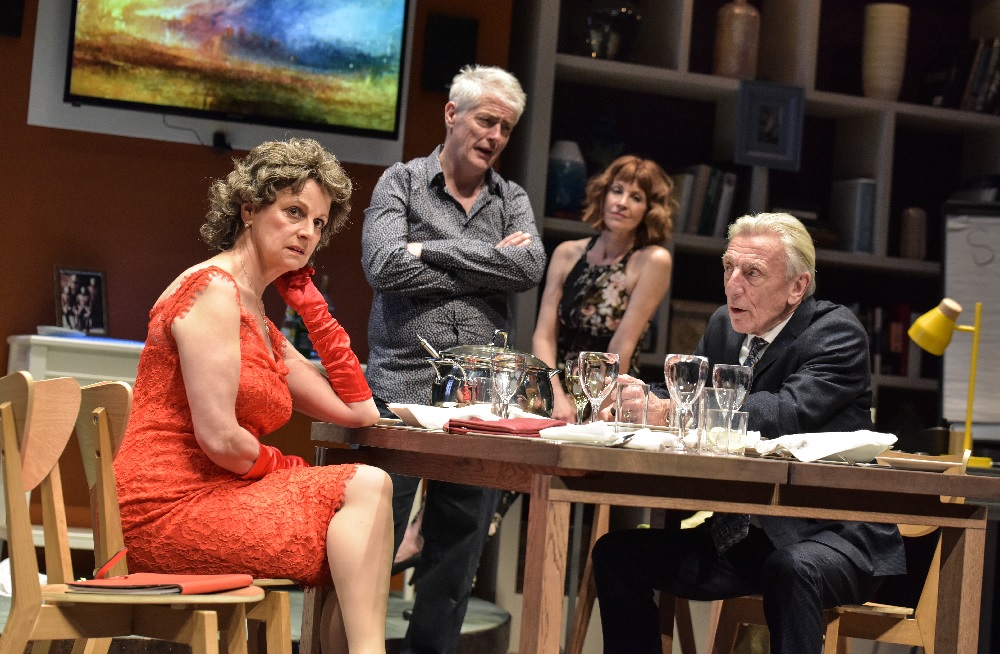 A fantastically frantic time at the theatre, Octopus Soup, written Jack Milner and Mark Stevenson, provides a bucketful of brilliant British slapstick with creative wordplay and the eponymous soup to boot!

An uptight insurance consultant Seymour (Nick Hancock) has an urgent conference call which his entire future rests upon. Unfortunately, an unsuspecting Seymour comes into contact with a bumbling burglar, Marvin (Paul Bradley) and from there onwards, the show builds with anticipation of when it will all go horrifically wrong. Being a British situation comedy through-and-through, Octopus Soup boasts surreal situations and endless quips, keeping the audience captivated and chuckling throughout its two-hour run-time.

The show’s stars bounce beautifully off one another, with every role making the scene dynamic and fresh. Whenever a scene feels as if it’s about to drag, a new actor is added, giving the comedy and character dynamics a fresh angle. The fleshing out of each relationship brought the chuckles in consistently.

The standout performance was Bradley’s as the burglar, his cockney charm and delivery consistently engaging and gaining the most belly laughs. Another crowd-pleaser was Seymour’s hysterical actress wife Gloria, played by Carolyn Blackhouse, with the audience cracking into laughter with her over-dramatic monologues about her personal woes.

In addition to a stellar cast, the set and props help aid the performance. There’s a spectacle set-piece with a TV/Webcam used to great effect to assist in the tension between Hancock and Bradley during a Skype chat with the insurance boss.

Speaking of props it would be amiss to not mention the titular octopus Terry, who is afforded a show-defining moment or two.

However, Octopus Soup is not without its flaws. The beginning of the second act dips in the flow – as the first half keep you on your toes at a rapid-yet-welcome pace, the second act slows down and in doing so halts the comedy for a short while.

Despite this, the show hits the laughs hard, rarely letting go. A superb comedy.