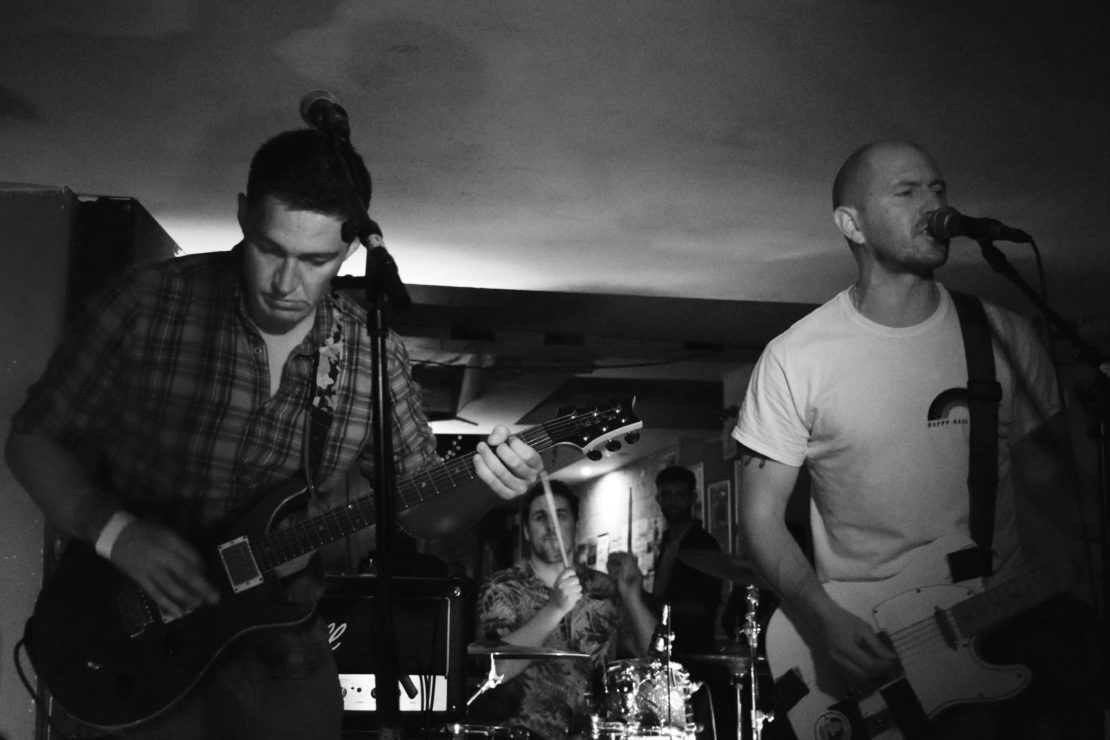 The stomping local surrealists fight the good fight for the Friday night Hub warmup crowd. The Vega Bodegas [above] hammer out a solid if not standout set, channeling strong Future Of The Left energy as they barrel through belters from last year’s album A Complete History Of Witchcraft. It’s hard not to smile at a foursome of obnoxious punkish upstarts yelling about minor earthquakes in Swansea and the benefits of bacon over porridge. BH

Up-and-coming Mancunians False Advertising bring their brand of high-octane swagger to an unsuspecting audience. It works – the trio’s jagged, screeching garage rock wins over even the barflies. Frontwoman Jen Hingley tears it up on guitar and snarls, proving her prowess as both a next-level guitar hero and incisive lyricist, covering mental health, false pretenses and desensitisation to political rhetoric and populism with raw, no-nonsense passion and a refreshing lack of preaching. BH

Having lit up Cardiff’s music scene for the better part of a decade, Threatmantics have refined their onstage presence to emerge deservedly as one of the MVP-status bands on this year’s Hub roster. The genre-defying boneshakers rattle through a medley of influences spanning the spectrum from country rock to balls-out metal, managing somehow to craft a cohesive sound that is all their own from the chaos. Looking for a reason to support your local music scene? Threatmantics are it. BH

Playing to an audience far smaller than deserved, Cardiff three piece Stay Voiceless stood out from the crowd on Saturday afternoon. Having already made a name for themselves locally by sampling Michael Sheen’s NHS speech in a 2016 single, the band’s often politically charged bile plays out well on the cramped, dark stage, a world removed from the smiles and sunshine outside. Rattling, distinctive basslines and frontman Chris Morgan’s searing, emotive vocals makes this aggro-indie treat well worth suffering Fuel’s dungeon in the mid-afternoon heatwave. BH

Some discerning curation at Tiny Rebel leads to a glut of excellent bands you could loosely label as from the UK’s DIY queer indie underground playing through most of Saturday. Irn Brunette’s grotty rockabilly makes way for one curveball, bassist Shakira taking the mic for an emotional shocker along the lines of Rhoda Dakar and Special AKA’s The Boiler. Cat Apostrophe’s stark, high-pitched minimalism mixes emotionally plain speaking with an undercurrent of steely resolve. But it’s Oh Peas that draw the day’s first full room, like a heartening response to old friends, or the power of being Extremely Nice People. It’s Rosie Smith and her funny, sad and wise songs, bashed into wonky pop shapes by her mates with various degrees of smiling abandon. Year Of The Horse, part stream of consciousness, part endurance test hurtles long and that’s it, therapy session and group hug in one. WS

Surely there are enough fans of Soundcloud bedroom producers in South Wales to appreciate Kingkhan, Cardiff’s low-key contribution to the wave of mumblerap and sad pop currently eclipsing the world? Apparently not – his early evening slot is woefully underattended, despite showcasing a knack for innovative, hazy pop songwriting and some decent vocal chops. Nevertheless, the optimistic young producer makes the most of his half hour and gives his performance everything he’s got, drawing curious onlookers into the layered melodies from recent album Lovesongs And Melodrama. BH

Craft ale in plastic cups has replaced moonshine, and the constant whacking of the men’s toilet door is less saloon bar and more high-grade trolling of misophonia sufferers, but for 45 minutes tonight Gwenifer Raymond brings the bluegrass hoedown gold, and one of this sweaty weekend’s best sets. Alternating between guitar and banjo, there’s fiendish dexterity but zero virtuosity, instead a slightly manic thrashing of each instrument, Raymond sometimes head down, long hair over face and strings, like some metal icon. Seriously though, men: learn to close a frigging door quietly. WS 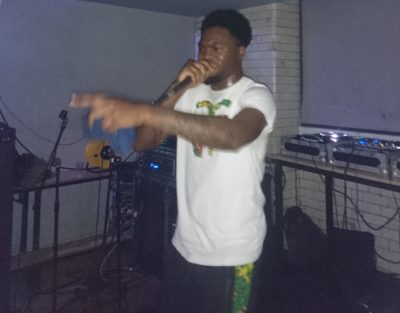 The real party zone of the weekend, ridiculous speaker stack pointed like a middle finger at Wetherspoons, surrounded by a pile of cans and fried chicken detritus big enough to inspire whole Daily Mail columns, is the Community Stage, an alleyway tent that broadcasts an all-day stream of bass-heavy grime, r’n’b and hip-hop. Connected to the excellent Ladies Of Rage collective, seemingly anyone in Cardiff who can do 16 bars on the mic can have a go, leading to perfect short attention span-satisfying bursts of party attitude and extreme volume, which later transfers to the basement of Kong’s [Magugu, above], for more copping off and people plugging their phones into the sound desk. WS

Despite having not yet released a single track, Cardiff’s new kids on the block offered one of Hub’s most exciting and unexpected highlights. Dressed in full Pride garb – sparkly shorts, fishnet tights and dresses a-gogo – the four-piece deliver a flawless funk-infused pop-rock set of instant singalong classics. The whole band shine, but frontman Levi in particular is an arena star in waiting, complemented by guitarist Ruben Kingman’s shit-hot solos. Keep a close eye on Black3lvis. If they play their cards right, they’re about to pop off – big time. BH

In the Hub 2019 silly name stakes, GSY!PA transcend 100% Rabbit, Twammers and Livin’ Cheap by virtue of actually being good, and provide Sunday’s thrillingly horrible early-evening bad trip. A duo of Kaskie onstage, tweaking electronics and occasionally screaming, and Emma offstage, triggering vocal effects that manipulate her voice into various forms of unsettling, a GSY!PA set is part alien summoning, part witchy incantation, and all the kind of mutant creepiness that Holly Herndon or The Knife would make if they were paid in Red Stripe. WS 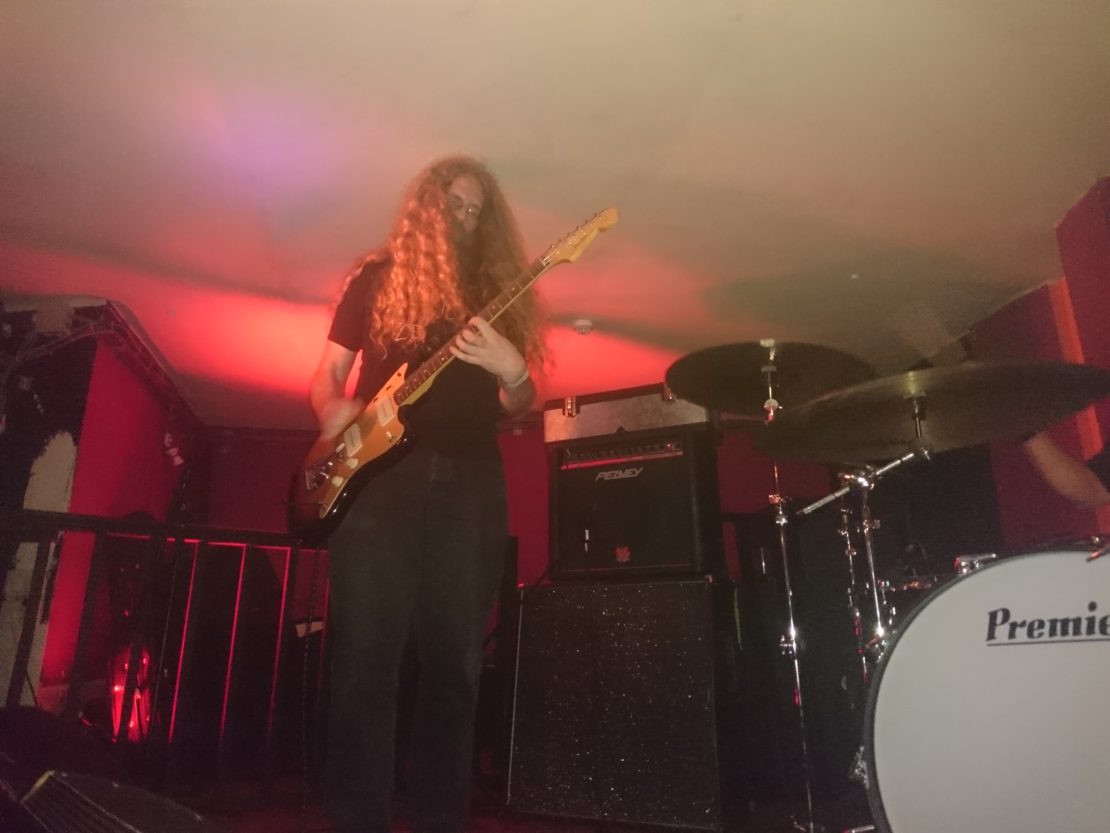 Lovers of the heavier guitars are gifted thoughtfully this weekend, with both The Death Of Money and Mugstar’s epic weight [above] flattening the Moon on Saturday night. But it’s Sex Swing on the Sunday that does it for this idiot writer: a six-piece from London, all members from other horrible bands, whose intense, repetitive riffing is aided by mangled electronics, Dan Chandler’s muttering and shouting, and, best of all, a massive baritone sax, whose abyssal honking only adds to the feeling of an ocean liner driving through your brain. A lurching monster, this weekend’s cocoon of noise you never want to escape from. WS 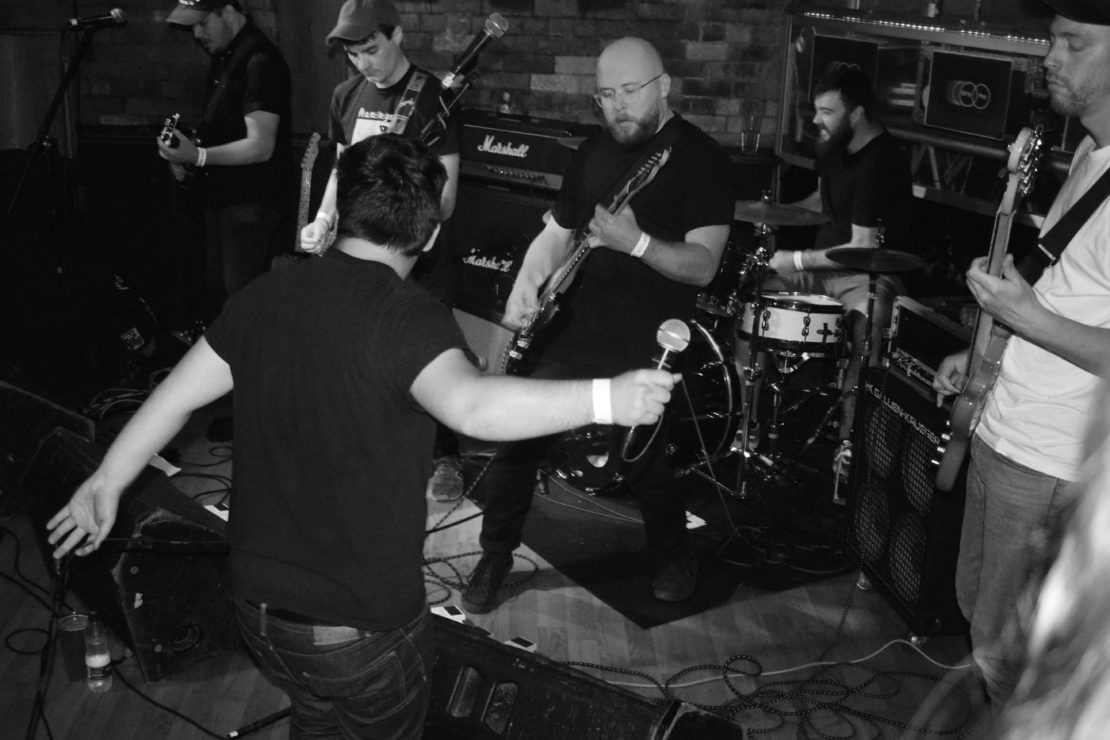 Spreading out their line of guitarists in classic sturdy defensive back-four setup, Breichiau Hir [above] fill both stage and air with a dense and interlocking storm of guitar textures: Explosions In The Sky-style coldness one moment, crashing emo chords the next. Through it all, vocalist Steff paces the crowd, the interplay between screaming, gruff melodicism and the tide of guitars proving fascinating to watch. A knotty racket, made by a bunch of grinning mates who wave to the crowd between songs, and that’s a great result for the lads. WS 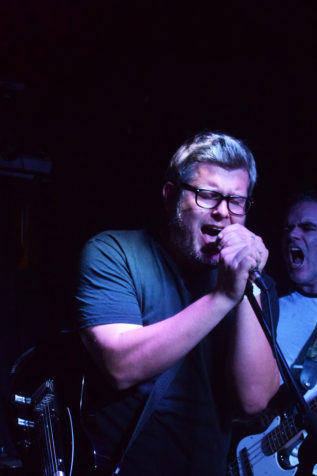 DARREN EEDENS AND THE SLIM PICKINS

Bringing something fresh to the Cardiff music scene with authentic country stompalongs, Canadian Darren Eedens and his denim-clad accomplices shock the crowd into action with a raucous blend of banjo and fiddle-driven lunacy. It’s impossible to stop toes from tapping, and most in the audience give into the urge to barn-dance their way to the front of the room within a matter of minutes. Traditional folksy topics of heartbreak, lust and drinking far too much whiskey are given an upbeat, infectious spin. It’s impossible to be unhappy at a Darren Eedens gig. Just try it. You will fail. BH

Awkward bastards. Tuneless bastards. Bassist wearing the worst shorts of all time bastards. The best Valleys post-hardcore/stop-start/screaming band around, Science Bastard [above] may only crop up once or twice a year now (insert STD reference here), but they’re still a great live headbutt, a twitchy and unpredictable racket that jumps maladroitly from post-rock noodling to audience-hugging chaos in seconds. As Sunday headliners, on this dying planet, in a venue you should probably be boycotting due to their lax policy on allowing dodgy racist bands to play, Science Bastard capture life’s absurdity better than most. All hail. It’s been a long weekend. WS