Satirical, sharp and darkly hilarious are all perfect descriptions of Richard Curtis and Ben Elton’s Black Adder II. What was so unique and brilliant about the original series was Rowan Atkinson’s swarve yet likable portrayal of Lord Edmund Blackadder. So when a theatre company takes on the monumental task of adapting such an iconic pop-cultural cornerstone it’s quite risky business.

Either the actors end up doing a subpar impression or take great liberties that leaves you feeling detached from the original material but, to much delight, this adaption by Everyman Theatre Cardiff falls into neither. Director Simon H West has pulled off a wonderful piece that is closely reminiscent of the original series, which thankfully never feels to self-conscious of itself.

Brian Smith’s portrayal of Blackadder was at first a little abrasive, as you naturally make comparisons to Rowan Atkinson’s performance, but as the show progressed he began to sink into the role and takes it into his own. Personally I was very impressed in the choices he made.

Peter Harding-Roberts and Hannah Brunt’s portrayals of Baldrick and Queeny were so close to Tony Robinson and Miranda Richardson’s characters you could almost forget that you’re not watching them on TV. You can tell a comic performance is outstanding when you still burst out laughing even when you’ve heard the joke told a thousand times before and I found myself doing exactly that when they both were on stage.

The stand out performance by far was Osian Llewelyn Edwards as Lord Flashheart. As soon as he burst through the crowd and onto the stage the audience was in hysterics. From the bad wig and moustache to the over the top a crude humour, ‘am I pleased to see you or did I just put a canoe in my pocket? Down, boy, down boy’, the portrayal stands very proudly next to Rik Mayall’s timeless performance.

Bell, Potato and Beer were the three episodes that were preformed in the open air of Sophia Gardens as the sun set over the river. The first episode, Bells, was absolutely hilarious with non-stop laughter from all of the audience. Full of the violent outbursts, the great double entendres and self-deprecation that made the TV series so lovable.

The second episode dragged a little towards the end, but still had some classic and hilarious laughs throughout. What really cemented it for me though was the final episode Beer, which was performed superbly with the performances of the uptight and overly-religious Whiteadders having me tickled with laughter.

The evening left me delighted and ready to marathon my way through the entire Blackadder series. I would recommend that anyone who loved the original TV show to take this chance to see it in a new light at the Everyman Open Air Theatre Festival. 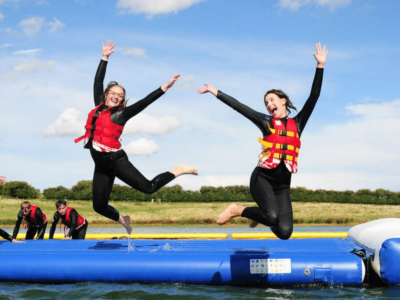 From aqua parks to ice cream parlours, make the most of Wales’ heatwave with these 10 things to do