Sweden has a rich history of pop hitmakers – what more could Stockholm’s First Aid Kit add? Plenty, as Charlie Cottrell finds out, chatting to Klara Söderberg of the duo.

Glancing at the UK charts in this, the year 2018, you’re often hard pushed to find any guitar-driven bands residing in the top twenty. First Aid Kit have evolved from YouTube starlets to international arena headliners, their latest album hitting a whopping number 3 in the UK album charts. They could therefore be considered something of an anomaly. Yet as they embark on their most impressive tour yet, including a headline slot at Cardiff’s Motorpoint Arena during their UK run, there’s no doubt that the First Aid Kit fan-base stretches far beyond the reaches of die-hard folk fans. The Swedish duo, sisters Klara and Johanna Söderberg, have racked up highly-praised appearances on Letterman and Jools Holland, and pulled in an enormous crowd to Glastonbury’s Pyramid Stage last summer.

The band rose from humble beginnings, covering folk songs new and old to a niche audience. Yet after uploading their version of Fleet Foxes’ Tiger Mountain Peasant Song in 2008, they garnered attention from the very band whose songs they were covering as lead singer Robin Peckenhold waxed lyrical about them on the Fleet Foxes website. Then, in a barely fictional turn the Söderberg’s found themselves watching a Fleet Foxes set at a Dutch music festival several months later; Peckenhold invited the pair to join him in singing the same song that had gained them so much traction on their journey to stardom. One in a series of incredible moments in the ten-year career of the Swedish sisters. But given the chance, who else would First Aid Kit perform with? “Ah, Leonard Cohen,” hypothesised Klara. “He’d be the absolute dream. And literally any Leonard Cohen song would do, too. After he passed, we were really upset, and decided we wanted to honour him, so we had this big show at the Royal theatre. It was this beautiful thing.”

Famed for their touching song-writing as much as their folk-driven, melodic guitar accompaniments, often the band have cited heavy influences from Cohen and Fleet Foxes. But when it comes to explaining where they find their magic, Klara Söderberg is at a loss. “I’m honestly glad I’m not a music journalist having to write about how music is made! Because with music, I just feel it. And that’s it. For me, that’s what song-writing is about. You have to be in a certain mindset, and you have to be open when you write. You can’t critique yourself in those moments. And it’s a really special feeling.”

There’s an element of transparency between the band and the fans, with the lyrics of the songs genuinely reflecting the place and time that the Söderberg’s find themselves in. They are, after all, only human. “When my boyfriend and I first met, I was in a period where I was writing all the time, and he was like ‘Oh my god, is this what it’s always gonna be like?!’. But now is a time where I can just turn off for a bit, and not feel like I have to create anything.”

After the release of debut album The Big Black and the Blue in 2010, First Aid Kit had another two albums under their belt by 2014. Three albums in four years is a slog, and it took its toll. “Often previously when I’ve been a position where I’m not writing, I get the fear. You know, deep down I’ll be wondering if I will ever be able to write a song again. All writers have to go through that but now I see that everything I do is a part of the song-writing process. Whether it’s just taking a walk or watching TV, not doing anything is also a part of it. Living my life, experiencing things.” A four-year gap between the third and fourth album – the same amount of time that the first three were released in – means Klara and Johanna gave themselves the opportunity to enjoy the moment. The success of fourth album Ruins tell us that it was worth taking its time over.

At the end of another festival circuit, First Aid Kit have played to thousands across Europe and America, as well as catching a few of the acts they shared the stage with in the process. “We got to see Beyonce at Coachella, so that was pretty neat. For us, it’s really special playing festivals because it’s a time where we see new and old bands and hang out with our friends.” Some respite is necessary even for the biggest of stars, though. “I think in general, when you’re playing shows every night, when you have a night off you don’t wanna go to another venue and see another show, you know?” A fair comment for a band that have rarely had a break from the smoke and lights. Things would be different if they were curating their own festival, though. “Oh I’d be there if we were picking them all. I think personally I would’ve loved to have seen Gram Parsons and Emmylou Harris perform, of course, so they’d be on the bill. Just seeing the two of them sing together that would be the best. Incredible singers. Leonard Cohen, of course, and Townes Van Zandt, he’d be very welcome.”

First Aid Kit’s contemporary take on the country music model means that Klara and Joanna are unafraid of addressing uncomfortable topics in the song-writing process, typified by 2017 single You Are The Problem Here, an angry lambasting of sexual assailants. Klara makes it clear though, that however stoic First Aid Kit are in the face of adversity, the band wasn’t formed in an attempt to change the world. “It wasn’t something we were planning to do. It wasn’t a conscious decision. But we’re writing more songs like that now because like everyone else, we’re really scared of the way the world is. If people are going to listen to our music and hear our voice, then that’s great. But it’s not because we feel we have a responsibility, it’s because we can’t do anything else. We have to speak up, because being quiet isn’t an option at this point.”

No strangers to the big stage, the Söderberg’s have recently announced a string of enormous arena shows in Scandanavia, including the 16,000 capacity Ericsson Globe in their native Sweden. Yet Klara insists that success at this scale was inconceivable in the band’s early days. “In our heads, stages like that – the ones in the UK and the one we’ve just announced in Stockholm, for example –  were never something that would happen. When I went there to experience a concert, to imagine yourself playing there was just too much. We’d go to really small venues and think, ‘could I just play here once?’ That was the dream.” A dream realised, and then some. 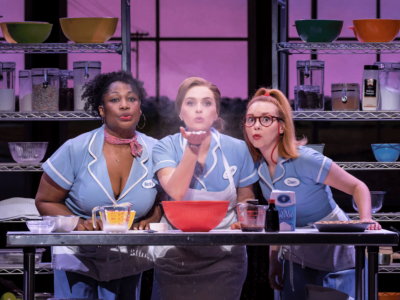